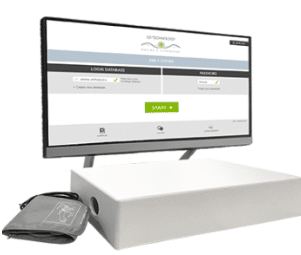 For more information about the ANS-1 email  sales@primarycarediagnostics.com.

The ankle-brachial index (ABI) is the ratio of the systolic blood pressure (SBP) measured at the ankle to that measured at the brachial artery. It has been shown that the ABI is an indicator of atherosclerosis at other vascular sites and can serve as a prognostic marker for cardiovascular events and functional impairment, even in the absence of symptoms of PAD.

Photoplethysmography (PTG) is an optical technique that can be used to detect blood volume changes in the microvascular bed of tissue. PTG technology has been used in a wide range of commercially available medical devices for measuring oxygen saturation, blood pressure and cardiac output, assessing autonomic function and also detecting peripheral vascular disease

Be sure to ask about flexible financing options for ANS-1 System.